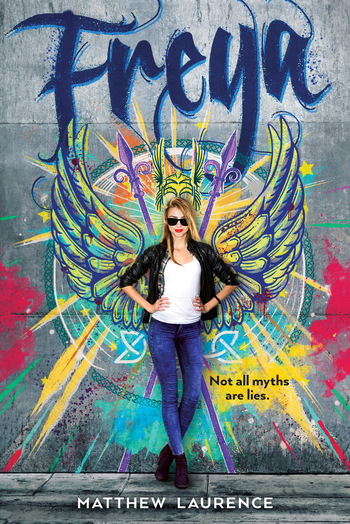 She must've been so happy to find that graffiti.
"Belief can move cities, shake the earth, and reshape the world. It can change the nature of men, empires, and reality itself. And it has changed you."
— Freya
Advertisement:

For nearly thirty years, a young girl named Sara Vanadi has lived at Inward Care Center, a mental hospital, telling anyone who'll care to listen that she's actually a god.

Sara is actually Freya, the Norse goddess of love, beauty, war, sex, magic, and a bunch of other stuff nobody worships her for anymore. Humanity's skepticism and her failure to maintain her religion have left her weak and jaded, which is why she's consigned herself to lying low and scraping by on the handful of followers she can find. It's a pretty crap existence, but it beats facing the enormity of her failure, so she's found a degree of contentment in it.

This all comes crashing down the second Garen, a god-hunter working for a shadowy organization called Finemdi, pops into her life with a job offer. Sara soon finds herself on the run alongside a bewildered orderly named Nathan, her desire for freedom bringing her up against an unbelieving world, corporate gods, and the pitfalls of modern fashion.

Think American Gods with a dash of Buffy.

The first novel in what appears to be an ongoing series, Freya features a mash-up of magic, philosophy, comic book action, and - through its heroine - a different perspective from the standard YA protagonist, in that gods don't think quite like regular people.

Due to its focus on deities, expect a ton of God Tropes.