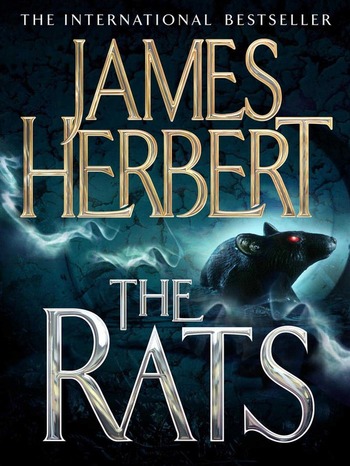 It was only when the bones of the first devoured victims were discovered that the true nature and power of these swarming black creatures with their razor sharp teeth and the taste for human blood began to be realised by a panic-stricken city. For millions of years man and rats had been natural enemies. But now for the first time – suddenly, shockingly, horribly – the balance of power had shifted…
Advertisement:

This is the premise of James Herbert's 1974 Nightmare Fuel novel, which began with the oft-repeated observation that in London nobody is ever more than twenty feet away from a rat. Herbert wondered what might happen if in a city of eight million people, twenty million or so rats were to develop a dim awareness that they not only outnumbered people but could find unity in strength. His rats mutate, become larger, fiercer, more intelligent, and can transmit a deadly necrotic plague into the bargain. And London is suddenly in trouble.

Criticized for its graphically explicit nature, both in terms of sex and violence,note It was published by shock-horror imprint, the New English Library, and became one of their biggest hits. and seen by others as a political satire on the fact that thirty years after the end of World War II, Britain's capital city STILL had slums and uninhabitable bomb-sites which were breeding rats and disease, the book sold out within three weeks and went direct to its first of many reprints.

The novel received a film adaptation in 1982 as Deadly Eyes. There have been three sequels; Lair, Domain and The City, the last of which is a graphic novel.

This horror story spawned an uncontrollable swarming horde of tropes, including:-