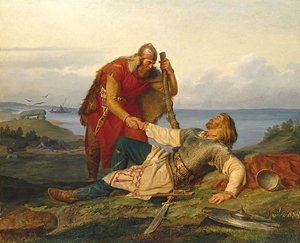 Hjalmar and Orvar-Odd
"Oh, how the mighty have fallen in battle!
Jonathan lies dead on the hills.
How I weep for you, Jonathan my brother!
Oh how much I loved you!
For your love for me was deep
Deeper than the love of women."
— David, 2 Samuel 1:25-26, The Bible
Advertisement:

This trope refers to a specific plot that is Older Than Dirt. In it, two heroes are intensely close friends. Unfortunately, one of them (usually the one who's not the main character) dies during the course of the story. The death has a profound effect on the remaining hero, and changes them forever.

It's important to note that: