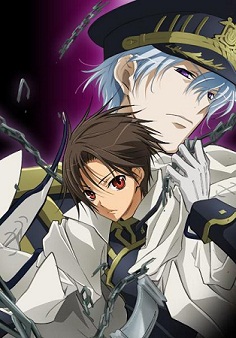 07-Ghost (Seven Ghost) is a fantasy manga written and illustrated by Yuki Amemiya and Yukino Ichihara. It was serialized in the monthly shōjo/josei manga magazine Monthly Comic Zero Sum

07-Ghost takes place in a Fantasy world where Zaiphon is the primary form of magic. The ability is to use it is very rare and therefore highly prized. Each of seven districts has a House of God that is protected by one of the 7 Ghosts, a human with such extraordinary abilities in using Zaiphon that they are believed to be blessed by God. Teito Klein, a former combat slave, is sent to attend the Barsburg Empire's Military Academy due to his ability to use Zaiphon. Teito is an amnesiac and doesn't remember anything of his origins; what he does learn of his past comes from his recurring and often traumatizing dreams.

While delivering one of his assignments to a teacher one day, he comes across the high-ranked official Ayanami and recalls that he killed his father. In a blind rage, he attacks Ayanami, only to wind up in jail. It is only thanks to Mikage, his best friend, that Teito escapes and comes across three priests of the District 7 Church, Frau, Labrador, and Castor.

The manga had its license rescued by Viz Media after Go! Comi went under. 07-Ghost has been adapted into a few drama CDs. An anime adaptation of 07-Ghost was produced by Studio DEEN and premiered in April 2009.