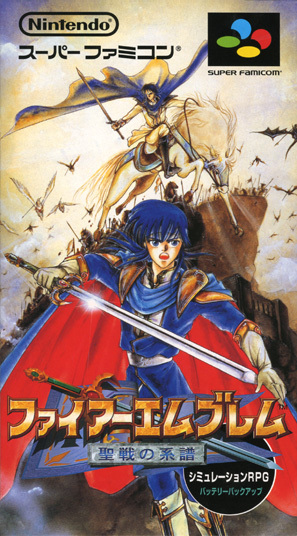 The crusade that spans generations.
Fire Emblem: Genealogy of the Holy War (Seisen no Keifu in Japanese) is the fourth game of the Fire Emblem series, only released in Japan on the Super Famicom in 1996. It takes place on the continent of Jugdral roughly 900 years before Fire Emblem: Shadow Dragon & the Blade of Light.
Advertisement:

Genealogy of the Holy War is a game that spans decades and generations — after several chapters with one party, the game continues with the children of the original characters. It starts off following Sigurd of Chalphy, of the Kingdom of Grannvale, as he fights a war against opportunistic marauders from the nearby kingdom of Verdane - an incident that spirals into a conflict that takes him across much of the breadth of Jugdral. Then, after a 17 year Time Skip, the game switches over to his son Seliph and his quest to liberate the entire continent of Jugdral from what has become the Empire of Grannvale.

The game is noted for its unusual gameplay elements: enormous chapters that require the capture of multiple castles, characters being unable to freely share their money or inventories, and letting players use every unit at once without an Arbitrary Headcount Limit. However, Genealogy of the Holy War is also effectively the foundation upon which "modern" Fire Emblem was built, as it introduced the Weapon Triangle system (swords beat axes, axes beat lances, and lances beat swords) that became a series mainstay, created the Skill system used by many later titles, was the first game to include the Relationship Values that would be eventually refined into its modern incarnation by Fire Emblem: The Binding Blade, and the marriage and children mechanics would later help define Fire Emblem Awakening and Fire Emblem Fates. Story-wise, the academic background of Sigurd, Quan, and Eldigan and the bipartite plot structure would later serve as primary inspirations for the story of Fire Emblem: Three Houses.

There are also two prominent manga adaptations of Genealogy, one by Mitsuki Oosawa and one by Nuts Fujimori. Both offer rather different interpretations on the events of the game, and both contribute to filling out the backstories and characterizations of numerous characters.

Genealogy of the Holy War was followed by Fire Emblem: Thracia 776, an interquel of the former that takes place during the Time Skip.

Fire Emblem: Genealogy of the Holy War provides examples of: