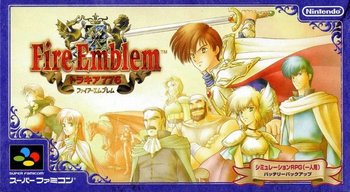 Reclaim your homeland, against all odds.
As ages passed and the 12 Crusaders became the talk of legends, a great rebellion arose and spread throughout the Land of Jugdral.
—Opening demo (completely untranslated in a Japanese game)
Advertisement:

Fire Emblem: Thracia 776 is the fifth game in Nintendo's Fire Emblem series, released only in Japan on the Super Famicom on September 1, 1999note The game was initially only available by downloading it to the Nintendo Power cartridge, with standard carts made available on January 21, 2000.. It is the last Fire Emblem title that series creator Shouzou Kaga worked on before leaving developer Intelligent Systems.

The game is an interquel for Fire Emblem: Genealogy of the Holy War, taking place toward the end of its 17 year Time Skip. It follows Leif, nephew of Sigurd and cousin of Seliph, as he tries to retake his country and fight back against the corrupted Grannvale Empire.

Thracia 776 is both more like a normal Fire Emblem game than its predecessor and quite different to most others — it returns to normal-sized chapters and maps, but it implements a few new gameplay mechanics like the Fog of War and the completely-forgotten fatigue meter. It's also notoriously Nintendo Hard, even by the standards of the franchise as a whole, mostly by virtue of what it fails to present to the player rather than what it actually presents.

Thracia 776 is followed by the Game Boy Advance game Fire Emblem: The Binding Blade, which takes place on the continent of Elibe in a new continuity.