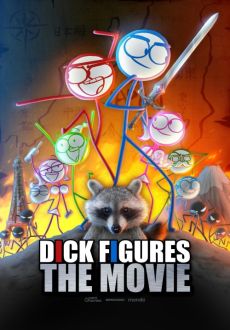 The Movie of Dick Figures, and quite a big damn one at that.

It was successfully Kickstarted in July 2012 (raising over $50,000 more than its goal), funding 72 minutes of film duration. It was released in September 2013 for purchase on YouTube, Google Play, Amazon, iTunes, and Mondo Media's website. It was later released in December for DVD and Blu-ray in the USA, and further free public viewing was made available as the film was split into twelve parts and uploaded to YouTube.

The film follows Vitriolic Best Buds Red and Blue as Pink's birthday comes around. Blue wants to give her the most romantic gift he can find, so the Raccoon sends him and Red on a journey to find the Greatest Sword of Destiny. As the reward for bringing the sword to him will be the "best gift ever", this sends them on a journey filled with explosions, chicks, car chases, and evil ninja armies that puts their lives — and their friendship — to the ultimate test.

The film demonstrates the following tropes:

Red impulsively eats all of their expired food.

Example of:
Way Past the Expiration Date

Red impulsively eats all of their expired food.