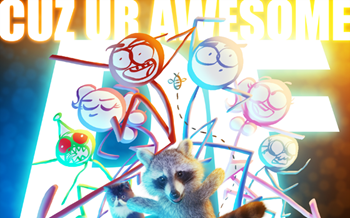 Dick Figures is a stick figure animated webseries created by Ed Skudder & Zack Keller (previously employed by Pixar, Jim Henson Company, Microsoft, and McDonald's advertising) about two best friends - well, not exactly the bestest of friends - named Red & Blue. It debuted on YouTube on November 18, 2010 and is currently produced by Mondo Media (Happy Tree Friends) and animated by Six Point Harness (first season of Wow! Wow! Wubbzy!). To date, it is the one of the most watched animated series on YouTube ever.

It’s more awesome than a supernova wrapped in bacon. From the mundane to the magical, the world of the series combines off-the-wall action, absurd comedy, filmic references, mythical creatures, adorable animals, an eclectic soundtrack, lots of explosions, and a cast of colorful characters living out their lives in complete acceptance of the insanity surrounding them. Yet at the adrenaline-powered-blood-pumping heart of it all, the show is just pure fun.

The basic plot of the movie is Red and Blue being sent on a quest by the Raccoon to find The Great Sword of Destiny. Several secrets will be revealed and the adventure will be taken to levels unheard of. The movie was released on September 17, 2013. Examples from the movie go on its own page.

Example of:
Here We Go Again!