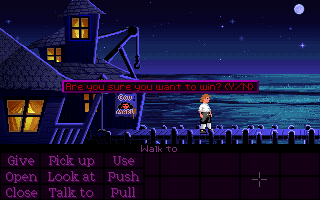 The best part: the code (Ctrl+W) is described in the manual!
Advertisement:

Cheats are a big traditions of gaming, whether it's to get through that Nintendo Hard part (or game), skip particularly bad sections of an otherwise great game, to screw around after you've finished a game... Or to ruin other people's fun. There are three main types of cheating in games (although the last is more about the act than the method).

As a more gray part of internal forms of this, there is also glitch exploitation. Sometimes this can change a game a lot but still make it playable for veterans, which makes it a form of "Stop Having Fun" Guys if it is mercilessly used on casual players, or it's an outright Game-Breaker, where it earns the same effect as cheating against opponents who don't use it themselves.

This is slowly becoming a Dead Horse Trope as online gaming, DLC, and achievements/trophies have become mainstay in the industry. Due to these factors, external cheating became much more difficult during the seventh generation of consoles. However, the command consoles, "debugging commands" or "developer modes" definitely aren't going away, especiallly in moddable games, where they have a legitimate use for debugging WIP mods or user maps.

Players, predictably, have different feelings about cheating. Some think that cheating in any form is inexcusable. They feel that games were meant to be played as is, and cheaters don't even deserve to look at a joypad. On the other side, players who do cheat feel that a game is meant to be enjoyed, not something to be frustrated about. They believe spending 3,945 hours constantly dying is just a waste of time, and those who do put in the time are losers who have no life. Things may, of course, vary depending on whether the player uses cheat codes on his first playthrough. If they do need cheat codes to beat a game at all, then they will likely be ridiculed by more experienced gamers who didn't need to resort to such tricks. However, if they managed to finish the game fair and square at least once, then probably nobody will blame them for putting in a cheat code in order to uncover some of the game's secrets or just have a tour around a particularly interesting location.note This was especially common during the pre-YouTube era with games whose cutscenes were usually much more appealing to the eye than the game itself and, if the game didn't include any sort of cutscene player or free savestates, most players would only have one single opportunity to watch them unless they would go to the effort of beating the game all over again.

More people than you might think fall squarely into the two above-mentioned extremes. Multiplayer cheaters, however, are much less polarizing, for one reason: cheaters directly affect the enjoyability of the game for others; thus, they're almost universally reviled.

Of course, sometimes the computer does this to you.

This is a page about types of cheating in video games. It is not to be confused with cheating in competitions.