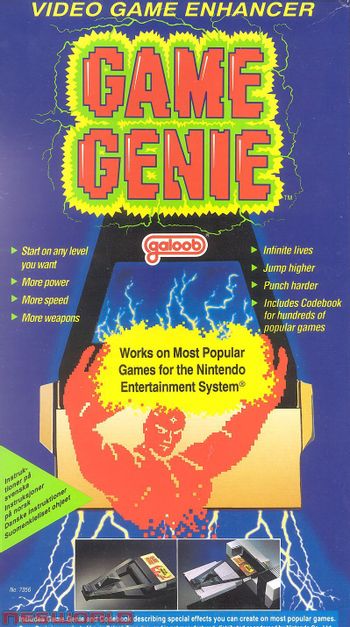 "Game Over? No way! 'Cause we got Game Genie! We tell you when it's over!"
—This commercial

Peripheral device developed by Codemasters and released by Galoob Toys which allows the user to effectively hack video games for a variety of effects, from such practical things as giving yourself infinite lives or ammo or making you immune to damage to stranger things like turning Mario into an indistinguishable purple thing that swims through air. This is accomplished by entering a series of six- to eight-digit codes onto the startup screen, which will modify the game's data or programming.

The original Game Genie was for the Nintendo Entertainment System and allowed you to enter up to three codes, sometimes jokingly referred to as three "wishes". note (This was likely intentional, as the hardware would have allowed for more, and the Game Boy version followed the same theme even though it also could have handled more.) The peripheral proved popular despite Nintendo's disapproval. A lawsuit ensued, temporarily halting the sale of Game Genies through an injunction, but the courts ruled in Galoob's favor, likening the use of the Game Genie to "skipping portions of a book" which is in no way a derivative work, let alone a pirated copy. Not that it deterred Nintendo, though, and in recent years the Japanese government outlawed the sale and distribution of third-party console enhancers, something which Nintendo may have had a hand with given their history of ruthless litigation. Sega on the other hand approved of the Game Genie, giving it their seal of approval. Versions of the Game Genie appeared for the Game Boy, Game Gear, Sega Genesis, and Super Nintendo (and possibly some other systems). Some of these allowed five "wishes" instead of three. There also exists a Family Computer version

of the Game Genie, but not much information is known about it apart from it being sold by a company called Realtec in regions where Famiclones are common.

Game Genies usually came packaged with a book containing codes, and users could subscribe and receive regular updates. In addition, more intrepid gamers would attempt to find their own codes. These days, there are websites where users attempt to create Game Genie codes. Most console emulators feature an emulated Game Genie as a built-in option, though they can also run an actual Game Genie ROM as well.

The Game Genie spawned one competitor, the Pro Action Replay, which worked in a similar fashion. Both peripherals were retired at the end of the 16-Bit generation. The equivalent for the 32/64-bit era was the Interact GameShark. The next generation of Console Wars, dominated by the PlayStation 2 and Xbox, benefited from a new generation of the Action Replay, as well as the Pelican Accessories Code Breaker. No off-the-shelf tool permits similar enhancement to the Wii, PS3, or Xbox 360 at this time, and with the upswing in online console gaming and remote hardware verification, they may not ever be back. Much of this has to do with newer consoles using modern hardware which can restrict programs from accessing one another's memory, a capability which if misused could result in all manner of cheating tools for online multiplayer games. However, someone did buy the Game Genie name to use for a save game editor program, and of course this is still very possible in PC games through software like Cheat Engine.

As such, the Game Genie and related devices have become a footnote in the history of gaming, remembered mostly by nostalgic gamers as a life-saver in the days of Nintendo Hard. In spite of this, Codemasters, ever since moved away from Game Genie and other cheat peripherals, brings zero mentions of them, quietly seeing them as their Old Shame even though some of their later games include cheat code systems as their creator in-jokes.