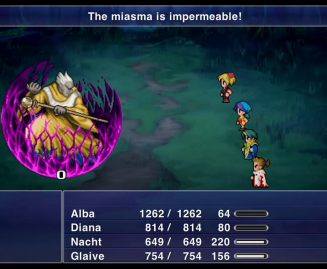 I think the game is trying to tell us something...
"If you run up against an enemy you just can't beat, maybe you should just try dying. Sometimes loss is victory, and victory loss. Think about it..."
— Soul Nomad & the World Eaters
Advertisement:

Sometimes the plot demands that you fail. The storyline requires the defeat of the main characters in order to make a point or explain a key event, regardless of whether or not the player would allow their party to fall in battle. There are two ways to accomplish this: One is the Cutscene Boss, where the player has no control over the battle's outcome at all — and the other is the Hopeless Boss Fight.

This is a boss with Nigh-Invulnerability, if not sheer invulnerability outright. Odds are good you won't be able to damage or hit him at all — he'll quickly reduce it to Scratch Damage or just ignore it outright as he launches One-Hit Kill (if not Total Party Kill!) attacks on your team, and if you aren't able to run from this battle on turn one, it's Game Over on turn two. Or is it?

These bosses tend to make their appearance near the beginning of the game, before the characters have had a chance to earn Experience Points or Level Up, or otherwise become more powerful than their predefined starting levels — this makes narrative sense as well, because this is when the characters would be least likely to survive an encounter with them anyway. Done well, this defeat will strike fear into the heart of the player, having learned firsthand just how powerful this boss really is; done poorly, it feels like a cheap trick designed to advance the plot, Suspension of Disbelief be damned.

Since games like to pretend to be fair, your opponent in the Hopeless Boss Fight tends to return later in the game for a proper battle. They have the odd tendency to be Climax Bosses: If they were the Big Bad or The Dragon, players will get to fight them after this Final Boss Preview by the end of the game as a straight up Final Boss (or Penultimate Boss).

Ideally, the game should make it somewhat obvious to the casual gamer the fight is probably intended to be hopeless, lest you waste your serious healing items and abilities. This is another reason why these tend to appear at the beginning of the game, as you haven't even acquired any serious healing items or abilities yet.

Often, players may confuse a hopelessly difficult boss with this and give up fighting on the assumption that the battle is intended to be hopeless... only to discover it isn't. More fiendishly, some games can silently observe the player's efforts to determine whether they put up a decent struggle before going down, with a genuine Game Over issued if they died too quickly, or make the objective to survive for a fixed amount of time, with any deaths resulting in game over.

Not all Hopeless Boss Fights exist to defeat you at a specific point to advance the plot; there may also be Border Patrol, confronting players who try to go Off the Rails in certain areas with a Hopeless Boss Fight, from which the only option is to Run or Die. If the monster will become defeatable as you gain power, it's a Beef Gate.

Sometimes, the apparently invincible boss can technically be defeated, if you have a precisely tuned tactical setup, access to a Disc-One Nuke, the advantage of a New Game+, endless hours of Level Grinding behind you, exploited a glitch, or abused a flaw in the AI. Or maybe you just cheated. If the developers severely underestimated players, it might not even require anything but sufficient skill or strategy. Since a Hopeless Boss Fight is one the game expects you to lose, the game will react to its defeat in one of several ways:

A specific subtrope of Fission Mailed, and related to Controllable Helplessness in that you're directly taking part in a situation that will only end one way. If the boss must be defeated in battle to avoid a Game Over, but invokes a Story Overwrite after the battle to defeat you, it's Heads I Win, Tails You Lose. If you can only win by not attacking, look for Sheathe Your Sword.

Compare Seemingly Hopeless Boss Fight, which can resemble this at first (though not in the case of Final Bosses, for obvious reasons). Contrast Foregone Victory, where it's you who can't lose the battle, or The Worf Effect for the story purposes it accomplishes. See also Lord British Postulate and Curb-Stomp Battle.

The Implacable Man (with his Nigh-Invulnerability superpower) can sometimes look and feel like a Hopeless Boss Fight. Likewise, the Boss in Mook Clothing can end up feeling like a "hopeless Mook battle" when your party is already on the ropes.

Anime and Manga
Comic Books
Film
Gamebooks
Literature
Live-Action TV
Newspaper Comics
Tabletop Games
Webcomics
Web Video
~You better run, better leave while you can! Don't wanna be a boy, you wanna be a man! You wanna stay alive, better do what you can, so beat it, just beat it!~
Feedback

The first time Jin challenges him, not only does the Khan take and deal massive damage (as well as using a polearm, which at that point you don't have the skills to properly counter) but he's outright invulnerable since reducing his health to zero does nothing and the fight only ends once Jin's health is depleted.

The first time Jin challenges him, not only does the Khan take and deal massive damage (as well as using a polearm, which at that point you don't have the skills to properly counter) but he's outright invulnerable since reducing his health to zero does nothing and the fight only ends once Jin's health is depleted.