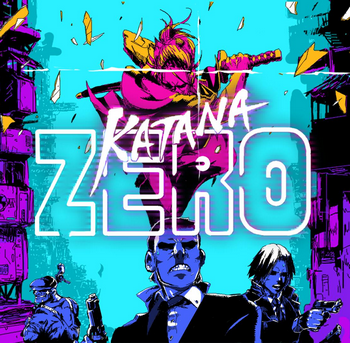 Katana ZERO is a 2019 Neo-Noir Cyberpunk 2D action platformer developed by askiisoft and published by Devolver Digital for Windows, Mac and Nintendo Switch.

You are a katana-wielding assassin, known only as The Dragon, who leaves no one alive. How do you do it? By utilizing Chronos, a drug that lets you screw around with time and even look into the future. Pretty sweet, right? Problem is, you've got some personal issues going on. For starters, you don't know much about yourself and the stuff there is to know is pretty nasty. You've also been having some really vivid nightmares. But you're seeing a therapist, so it evens out, right? Still though...

Gameplay-wise, the levels are essentially you planning out your line of attack during your assignments. You can counter bullets with your trusty katana and make time go slower to get the drop on your prey. You can even grab certain objects and throw them at the baddies. The good news is your enemies go down in one hit. The bad news is you go down in one hit too. Should that happen, you have to start that section all over again, enemies and everything, so don't get cocky. After you finish a section, you get to see a security cam play out in your real-time so you can see how unstoppable you were.

There's also a real-time conversation system that can be applied to everyone you meet. Do you listen to every detail your superior tells you? Or do you hang up on them at your earliest convenience? Do you get into detail about your nightmares with your therapist? Or do you just ask for your daily dose of Chronos?

Whatever you do, never forget: LEAVE NO SURVIVORS.

Free DLC is in development for the game, although the process to make it has taken a considerable amount of time due to being several times larger than what the developer had initially planned.

open/close all folders
#-L
M-Z
Yes, that should work.