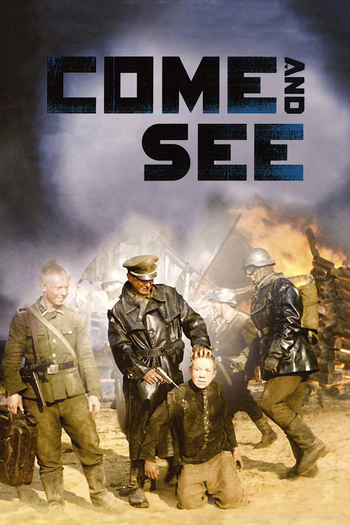 "And when he had opened the fourth seal, I heard the voice of the fourth beast say, Come and see. And I looked, and behold a pale horse: and his name that sat on him was Death, and Hell followed with him."
— Revelation 6:7-8, shown in the titles
Advertisement:

Come and See (Russian: Иди и смотри, Idi i Smotri) is a 1985 Soviet war drama about World War II. It is loosely based on the 1978 novel I Am From the Fiery Village by Ales Adamovich, who also co-wrote the screenplay.

We follow Flyora, an adolescent Belarusian villager who achieves his dream of joining the local partisans in the fight against the invading Nazis. However, he quickly finds out that War Is Hell and embarks on a nightmarish journey through wartime tragedies and Nazi atrocities. Will he make it through with his life, and more importantly, with his sanity?

A joint Mosfilm-Belarusfilm production, the film was added to the The Criterion Collection and released on June 30, 2020.