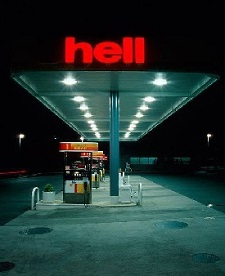 Explains the gas prices.
So if you've got a hankerin',
I'll tell you where to go,
Just look for the busted neon sign
That flashes... Eat at Joe's
— The Folksmen, A Mighty Wind, "Old Joe's Place"
Advertisement:

A seemingly regular sign that, with letters broken or removed, portrays a different meaning. This can be caused by coincidence (neon tubes burning out, letters falling off), or it can be intentional vandalism.

Often used to create or highlight an unintended innuendo, such as "Public Library" becoming "Pubic Library". Also used in many After the End and Future Imperfect scenarios. The seedier kinds of Neon City will be full of this sort of thing. Compare the comedic version Censored for Comedy.