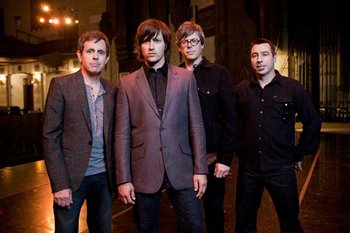 The Old 97's are an Alternative Country band from Dallas, Texas. Formed in the early '90s, they have twelve studio albums plus a holiday album:

Rather incredibly, their line-up has stayed consistent for twenty years:

The band also appears in The Guardians of the Galaxy Holiday Special performing an original song, and a new version of one of their Christmas songs with Kevin Bacon.