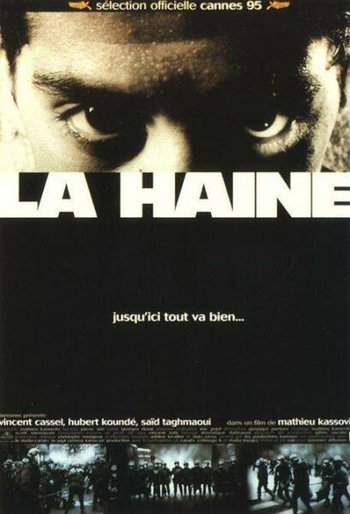 "It's about a guy falling from a 50-story building. As he falls, he tries to reassure himself by repeating: 'Jusqu'ici tout va bien... jusqu'ici, tout va bien... jusqu'ici, tout va bien.' translation "So far, so good." ("Until here, all goes well", literally). It's not the fall that matters. It's the landing."
Vinz: Who made you a preacher? You know what's right and wrong? Why do you side with the assholes?
Hubert: Who's the asshole? If you had stayed in school, you'd know that hate breeds hate, Vinz.
Advertisement:

La Haine (English: Hate) is a 1995 black-and-white French crime drama film written and directed by Mathieu Kassovitz and set in the modern-day slums at the north of Paris — more precisely, in Seine-Saint-Denis (aka "93" or "neuf-trois" from its department number).

The film starts the morning after a riot ensues in the slums following the beating and arrest of a young Arab named Abdel Ichacha, and centers around a trio of banlieusardsnote suburbanites that are friends of Abdel's — Vinz (Vincent Cassel), a hot-headed Jew; Saïd (Saïd Taghmaoui), a wisecracking graffiti artist Beurnote the term "Beur" is slang meaning any French-born descendant of North African immigrants; and Hubert (Hubert Koundé), the oldest and wisest of the three, who is black.

Taking place over roughly the next 24 hours, the group tries to come to grips with their anger over Abdel's predicament while wandering through aimless lives filled with prejudice and profiling, with Vinz harboring an extreme desire for revenge. When news breaks that a cop lost their handgun in the riot, a series of events unfolds against a cultural backdrop of unending tension between the police and the people that reaches an intense boiling point.