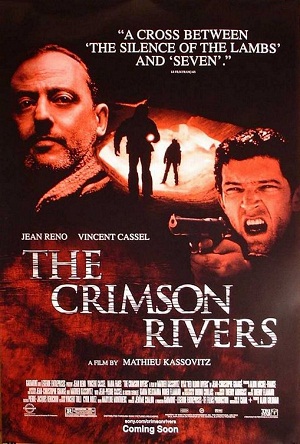 Detective Superintendent (Commissaire Principal) Pierre Niemans (Jean Reno), a well-known investigator, is sent to the fictional small university town of Guernon in the French Alps to investigate a brutal murder and mutilation; the victim's body had been placed in the fetal position, his eyes removed and his hands cut off. The victim was a senior student of the university. Superintendent Niemans begins his investigation by enlisting the help of Fanny Ferreira (Nadia Farès), who is a glaciologist and a student at the university.

Meanwhile, Detective Inspector (Lieutenant de Police in French) and former car thief Max Kerkerian (Vincent Cassel) is in the nearby town of Sarzac investigating the desecration of the grave of a girl who died in 1982, and the theft of her photos from the local primary school. His first suspects, a gang of skinheads, lead him to Guernon, where his investigation collides with that of Superintendent Niemans. As the plot unfolds, Niemans and Kerkerian notice the startling connections between their cases, and the remainder of the film revolves around their combined efforts to solve the mystery and prevent further bloodshed.

In 2004, a sequel named Crimson Rivers : Angels of The Apocalypse was made, with Jean Reno still being a mentor for a young cop, but with Benoît Magimel taking the place of Vincent Cassel, as Capitaine Reda. It also starred Christopher Lee as the villain.

Has a Spiritual Successor, The Mark of the Angels - Miserere, another Jean-Christophe Grangé adaptation with a similar plot.

The two films contain examples of: