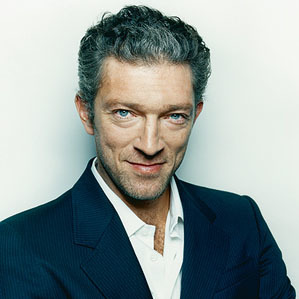 He is the son of actor Jean-Pierre Cassel. Vinz from La Haine was his Star-Making Role in French cinema, and he is also known for playing in English language films such as Ocean's Twelve, Ocean's Thirteen, Eastern Promises and Black Swan.

Throughout his career, he has put his eerie looks, intense Icy Blue Eyes stare and acting skills to good use, playing a sizeable collection of villainous, Ax-Crazy, deviant, jerkass, mood-swinging or simply weird characters and, alternatively, a good chunk of dashing characters, occasionally hamming it up with an outrageous accent in non-French productions. A lover of Brazil, he practices Capoeira, which came in handy for his roles on occasion.

Oh, and... he also played James Bond... in a Brazilian comedy short

He was married to Monica Bellucci from 1999 to 2013. Since August 2018, he is married to French model Tina Kunakey, who is thirty years his junior.