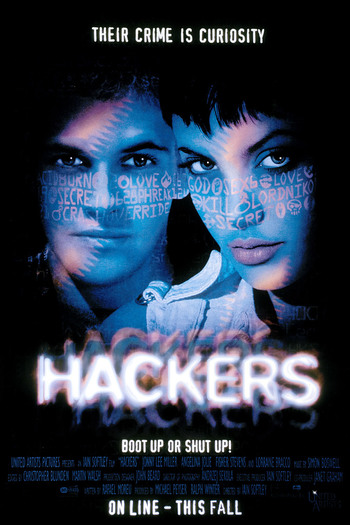 A 1995 techno-thriller directed by Iain Softley, about a small group of underground computer hackers who discover a scheme being run by the security chief of a large corporation.

In a prologue flashback, Dade Murphy, age 11, going by the hacker alias Zer0 Cool, is found guilty of crashing 1,507 computers, and single-handedly causing a drop in the New York Stock Exchange. In deference to his age, he is sentenced to seven years of probation, in which he is forbidden from owning or operating a computer or touch-tone telephone.

Fast forward seven years: Dade's mother, now divorced and with full custody of Dade (Jonny Lee Miller), moves them both to New York for a fresh start. Dade struggles to make friends, but ends up falling in with a new hacking crowd, including Phantom Phreak (Renoly Santiago), Cereal Killer (Matthew Lillard), Lord Nikon (Laurence Mason)... and Joey (Jesse Bradford). Not long after, Joey, the kid of the group, breaks into a supercomputer at Ellingson, a large oil and mineral conglomerate. In a Contrived Coincidence, he downloads part of a worm program — one created by the crooked head of IT Security for Ellingson, Eugene "the Plague" Belford (Fisher Stevens), himself a hacker gone pro. Belford is using the worm to quietly embezzle many millions of dollars from Ellingson.

Seeing an opportunity, the security chief creates a virus called daVinci - which threatens to infect and sink several Ellingson oil tankers, thus causing a major global ecological disaster. Having 'found' the virus, Belford presents the virus's threat as a reason to contact the Secret Service to help find the intruder. When the Secret Service investigates with Ellingson's cooperation, Belford discovers Dade (and his past as Zer0 Cool) and pressures him to get the file Joey downloaded - ultimately threatening to alter law enforcement databases so his mother gets "disappeared into the system." Dade gets Belford the file - but realizes his mistake soon after. Now, it's up to Dade, Phreak, Cereal, Nikon, and Kate (Angelina Jolie), Dade's crush, herself the hacker Acid Burn, to figure out the truth, and get the evidence they need to clear their names.

Hackers is known for referencing top-of-the-line computers of the time (now horribly, horribly outdated) and unrealistic depictions of hacking, but it nevertheless remains quite entertaining. It's also notable as being one of the earliest appearances of Angelina Jolie, who plays Dade's love interest, Kate. (Miller and Jolie would end up getting married not long after the movie finished - it was the first marriage for them both, and it ended up falling apart not long after.) While real computer hackers will sneer at the movie in public (except for those who find the research failure to be funny as HELL), secretly they desperately wish that it were true: it's a world where hackers are slim and trendy, hackers save the world from evil corporations, and most importantly, Angelina Jolie ditches her jock boyfriend for a hacker.

Also shows a prototype of the racing game "WipEout."