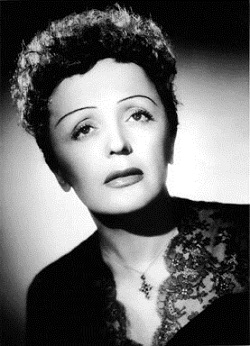 Édith Giovanna Gassion, better known as Édith Piaf (19 December 1915 – 10 October 1963) was a singer who became widely regarded as France's national diva, as well as being one of France's greatest international stars of the 20th century. She also had acting parts in some films, in which she also performed songs.

She sang in the streets of Paris as a teen and was discovered in Pigalle by nightclub owner Louis Leplée, who persuaded her to sing in his cabaret on the Champs-Elysées. She then rose to national stardom in the late 1930s and to international stardom after World War II. She was nicknamed "La Môme Piaf" (meaning "The Waif Sparrow" or "The Little Sparrow" in Parisian slang), hence her stage name. She sang mostly about love, and she always wore a Little Black Dress on stage.

Some parts of her early life were heavily romanticized if not purely invented, but otherwise her personal life was characteristically dramatic. From the age of 3 to 7, she was allegedly blind as a result of keratitis. Her one and only daughter died at age 2 in 1935. She was watched by the police as a suspect after the murder of her first manager Louis Leplée, but later cleared. Her lover Marcel Cerdan (one of the greatest French boxing champions in history) died in a plane crash in 1949. She was involved in three serious car crashes after 1951, leading to morphine and alcohol addictions and rheumatoid arthritis. Said addictions and illness weakened her, made her look much older than she was, and ultimately caused her death on October 10, 1963, at age 47. A close friend of hers, Jean Cocteau, died the next day, a few hours after her.

She had high-profile affairs with many of her male associates and some of the biggest celebrities in France. She married twice: her first marriage in 1952, to singer Jacques Pills, lasted for four years. Her 1962 marriage to Théo Sarapo, a French singer and performer of Greek origins 20 years her junior, lasted until her death. Théo Sarapo didn't survive her for long; he died from his wounds after a car crash in 1970 at age 34.

Some of her most famous songs: