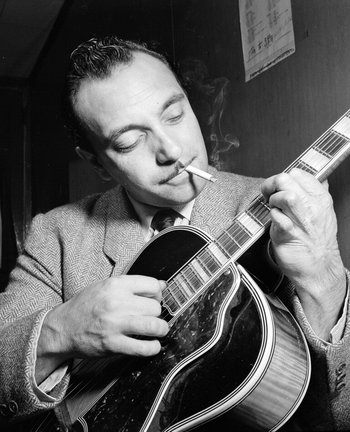 Django Reinhardt (born Jean-Baptiste Reinhardt, January 23, 1910 - May 16, 1953) was a Belgian Romani Jazz guitarist, famous for his jaw-dropping virtuosity despite a debilitating burn injury on his left hand.

When he was 18, his left hand was severely damaged by a fire started in his caravan, causing him to lose much of his ability to move his ring and pinkie fingers. Nevertheless, he continued to play music on the guitar, adjusting his style in a way that prevented his handicap from limiting his abilities. Later on, he was introduced to Jazz music from the United States— particularly the recordings of trumpeter Louis Armstrong— and soon met a very talented Parisian violinist named Stéphane Grappelli who shared similar interests. Impressed with each other's talents after a jam session together, they formed an all string band called the Quintette du Hot Club de France, composed of Django and Stéphane as the lead players, and a rhythm section composed of two guitarists (one of which was Django's brother Joseph) and an acoustic bass played by Louis Vola. They became the biggest act of the French Jazz community, with records that reached audiences across the Atlantic.

The Quintette broke up during the occupation of France by Nazi Germany, with Grappelli fleeing to England while Django elected to remain in Paris. After the war, Django briefly reunited with Grappelli for another tour in the UK before heading to the United States for a tour with famed Jazz composer Duke Ellington in 1946. Django returned to France in 1949, spending the rest of his days in retirement. He died of a brain hemorrhage in Paris on May 16th, 1953.

Django is frequently cited as one of the greatest guitarists who ever lived. His playing— with speed, complexity, and phrasing that are already incredibly impressive by any standard— takes on an almost supernatural quality in light of his injury. He fretted mostly with the two undamaged fingers on his left hand, only utilizing his ring and pinkie fingers for chords. He's unanimously considered the greatest and most influential Jazz musician from outside of the United States, having popularized hot string Jazz and fathered the subgenre of Manouche Jazz. Because he was born in Lessines, Belgium, he is technically seen as a Belgian, though he spent most of his life in France. Therefore both countries try to claim him as their own.

Many, many, many of the best guitarists and jazz musicians in the world have been inspired by him in some way. Classic Jazz guitarists Charlie Christian and Wes Montgomery were both direct 'descendents' of his, and contemporary artists such as Eric Clapton, Jeff Beck, Chet Atkins, B.B. King, Les Paul, Stevie Ray Vaughan, Tony Iommi, Jimmy Page and Richard Thompson have all gone on record stating their great admiration of his abilities.

A biopic titled Django came out in April 2017, starring Reda Kateb in the title role.

Tropes that pertain to Django include: