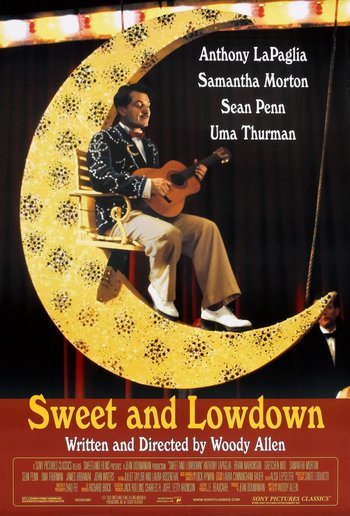 Sweet and Lowdown is a 1999 American comedy-drama film written and directed by Woody Allen.

Set in The Great Depression, the film tells the story of jazz guitarist Emmet Ray (played by Sean Penn) who regards himself as the second greatest guitarist in the world (after jazz icon Django Reinhardt). Though a talented musician, Ray's personal life is a shambles: He is a spender and a womanizer who believes that falling in love will ruin his musical career. Due to his heavy drinking, he's often late or even absent for performances with his quintet. He meets a shy mute woman, Hattie (Academy Award nominated Samantha Morton) and, after overcoming some initial frustration due to the difficulties of communication, they form an affectionate and close relationship, but Ray's whims make the bliss short-lived. The film also stars Uma Thurman as Blanche, a socialite.

Like one of Allen's previous works, Zelig, Sweet and Lowdown is occasionally interrupted by interviews with critics and biographers like Allen, Nat Hentoff, and Douglas McGrath, who comment on the film's plot as if the characters were real-life people.

Sweet and Lowdown contains examples of: