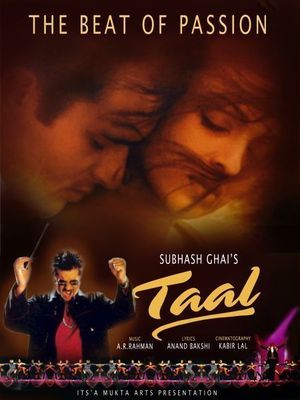 Match my rhythm to yours.
Rise in love!
Advertisement:

Mansi (Rai) is the daughter of Tarababu, a poor but influential singer and musician. Manav (Khanna) is the eldest son and heir of the Mehtas, a wealthy and Westernized family. After seeing Mansi while photographing India, which he is visiting for the first time, Manav follows her around and photographs her. When Manav is caught and Tarababu confronts the Mehtas, they take the opportunity to use his influence on the local politicians to help them secure a land deal, buttering him up while secretly looking down on him for being poor.

After Mansi and her father are horribly snubbed while paying them a visit, Mansi becomes a famous pop star and starts a relationship with her agent (Kapoor). Will she choose her first love or her newfound fame and fortune?

Was chosen by Roger Ebert as one of his top Overlooked Films, and was the first Hindi film to make the top 20 on Variety's box office list.