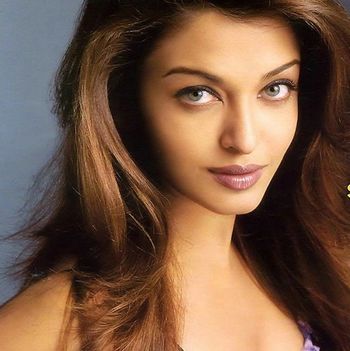 Aishwarya Rai Bachchan (born Aishwarya Rai, 1 November 1973) is an Indian actress and former Miss World. Before starting her acting career, she worked as a model and gained fame after winning the Miss World title in 1994.
Advertisement:

Often cited by the media as one of the most beautiful women in the world, Rai made her movie debut in Mani Ratnam's Tamil film Iruvar (1997) and had her first commercial success in the Tamil movie Jeans (1998). She came to the attention of Bollywood in the movie Hum Dil De Chuke Sanam (1999), directed by Sanjay Leela Bhansali. Her performance in the film won her the Filmfare Best Actress Award. In 2002 she appeared in Bhansali's next project, Devdas (2002), for which she won her second Best Actress Award at the Filmfare. After a low phase in her career during 2003-2005, she appeared in the blockbuster Dhoom 2 (2006), which turned out to be her biggest Bollywood commercial success. She later appeared in films like Guru (2007) and Jodhaa Akbar (2008), which were commercially successful and got her critical acclaim. Recently, she starred in Robot (2010), the third highest grossing movie in Indian history. Rai has thus established herself as one of the leading contemporary actresses in the Indian film industry.

During her career, Rai has acted in over forty movies in Hindi, English, Tamil and Bengali including the international productions Bride and Prejudice (2003), The Mistress of Spices (2005), The Last Legion (2007) and The Pink Panther 2 (2009) in English. As her current name suggests, she is now married to Abhishek Bachchan, son of Amitabh Bachchan. She took a hiatus from film in 2010 while pregnant with their daughter, although she continued to appear in print ads as a fashion and makeup model. In 2015 she returned to acting.