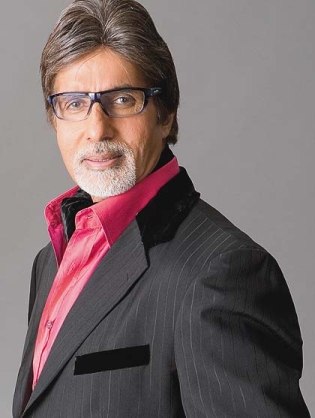 Amitabh Bachchan (born 11 October 1942) is an Indian film actor. Also called Big B and Shahenshah. He first gained popularity in the early 1970s as the "angry young man" of Bollywood cinema, and has since become one of the most prominent figures in the history of Indian cinema. Perhaps the Indian equivalent of Sean Connery (notable for their distinctive beards and voices) and Morgan Freeman (both Morgan and Big B played God).
Advertisement:

Bachchan has won numerous major awards in his career, including three National Film Awards and twelve Filmfare Awards. He holds the record for most number of Best Actor nominations at the Filmfare Awards. In addition to acting, Bachchan has worked as a playback singer, film producer and television presenter, and was an elected member of the Indian Parliament from 1984 to 1987.

He's also the host of Kaun Banega Crorepati, the Indian version of Who Wants to Be a Millionaire?

Westerners might recognize him from clips of his movies used in Slumdog Millionaire, in which protagonist Jamal is ecstatic over getting his autograph. He also has a small role in Baz Luhrmann's version of The Great Gatsby (2013), as Meyer Wolfshiem, Gatsby's Jewish mobster business partner.

There's been at least one internet poll declaring him the most well-known actor in the world.

Ultimately the most badass and coolest veteran Bollywood actor around.