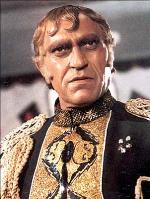 Mogambo Kush Hua!
Amrish Lal Puri (22 June 1932 – 12 January 2005) was an iconic Indian actor who appeared primarily in villainous roles in Hindi movies. His most remembered roles are Mogambo in Mister India (1987) and Mola Ram in the Hollywood film Indiana Jones and the Temple of Doom (1984).
Advertisement:

He was the younger brother of another character actor who played villains, named Madan Puri. While Madan did his best work in comically villainous roles, Amrish's striking bass voice, the ability to extend his eyes widely out of their eyelids during climactic scenes and outsized acting style made him a formidable bad guy in even the most melodramatic movies. He also played sympathetic but overbearing father figures on occasion, and the occasional arthouse role.

Amrish had a passion for collecting hats, and bought a hat or two on every trip abroad. He had a collection of over 200 hats from across the world. Amrish was a very religious person by heart and a Shiva devotee.

He died in Mumbai in 2005 after a brain hemorrhage at the age of 72. His autobiography The Act of Life was published in 2006 and talks about the film industry as he saw it and about his religious beliefs.