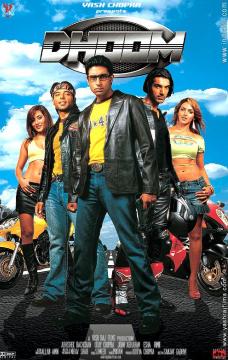 Dhoom (Rock) is a successful series of Bollywood action-comedy films, released in 2004, 2006 and 2013 respectively. Both follow Mumbai supercop Jai Dixit and his partner Ali in their pursuit of supposedly unstoppable thieves. Dhoom 1 features Kabir, leader of a local gang of motorcycle-riding bank robbers. Dhoom 2 has Aryan, an international art thief and master of disguise. Dhoom 3 has Sahir, the son of a circus owner seeking revenge against a bank for destroying his father's circus. Plot Holes abound, but they possibly get away with it by taking Refuge in Audacity.

Do not confuse this with Doom, or even a Bollywood knockoff of Doom.

These films contain the following tropes: