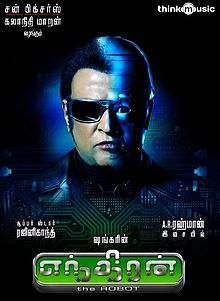 The most expensive and third highest grossing movie in Indian history, Robot (Endhiran, in the original Tamil) is an action comedy about the brilliant scientist Dr. Vaseegaran (played by Rajnikanth) who creates an Artificial Human named Chitti (also played by Rajinikanth, though the two characters look very distinct). Intending to offer Chitti to the Indian army, Dr. Vaseegaran first has to teach his creation how to function in society. Though he's superintelligent, Chitti takes things very literally, and he has zero knowledge of social situations. Still, he tries to be as kind and helpful as possible. Dr. Vaseegaran and his beautiful girlfriend Sana (played by Aishwarya Rai) try everything they can to make Chitti into a real person — although Sana's slowly getting annoyed at how much time her boyfriend spends at work, instead of with her.

Unfortunately, Dr. Vaseegaran's old tutor, Professor Bora, is stricken with a rather nasty case of jealousy and sets out to prove that Chitti is unsafe. Chitti encounters further backlash when rescuing people from a burning building, due to his inability to understand Tamil cultural rules.

Instead of abandoning Chitti, Dr. Vaseegaran decides to teach the android how to feel emotions and make moral judgements. Dr. Vaseegaran succeeds beyond his wildest dreams, but begins to regret it when Chitti falls in love with Sana. All the while, Professor Bora watches, ready to exploit the tension and frustration between the three.

It gets worse. It also gets really, really awesome. See for yourself!

Robot pulls out all the stops when it comes to action, displaying a fantastic level of visual creativity. The film also has by far the most hilarious and dynamic special effects to ever come out of Bollywood.

Notable for being the only collaboration between monster-meister Stan Winston (whose most beloved creations include The Terminator and The Alien Queen) and Martial-Arts Luminary Yuen Woo-Ping, who is beloved for his works with Jet Li and his masterful combat-choreography on classics like Once Upon a Time in China and Crouching Tiger, Hidden Dragon.

It's successs spawned a sequel known as Robot 2 or more known as 2.0 which was released in November 29, 2018, 8 years after the original was released.