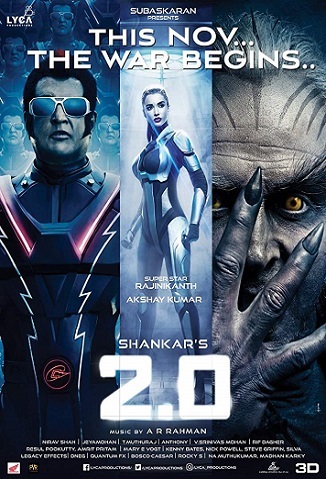 2.0 is a 2018 Indian Tamil-language science fiction action film written and directed by S. Shankar. Produced by Subaskaran under the banner of Lyca Productions. As the second installment in the Enthiran franchise, 2.0 is a standalone sequel to Enthiran (2010), featuring Rajinikanth reprising the roles of Vaseegaran and Chitti, alongside Akshay Kumar and Amy Jackson. Sudhanshu Pandey, Adil Hussain, Kalabhavan Shajohn, and K. Ganesh appear in supporting roles. The film follows the conflict between Chitti, the once dismantled humanoid robot, and Pakshi Rajan, a former ornithologist who seeks vengeance upon cell phone users to prevent avian population decline. The soundtrack is composed by A. R. Rahman, with lyrics written by Madhan Karky and Na. Muthukumar.

Produced on an estimated budget of ₹543 crore (US$76 million), 2.0 is the most expensive Indian film to date. Production began in 2015, with principal photography conducted at AVM Studios later that year. The first schedule was filmed at EVP World. Scenes were primarily shot in India, particularly in Chennai's Madras Boat Club and Delhi's Jawaharlal Nehru Stadium. Filming was completed by August 2017. The film is the first in Indian cinema to be natively shot in 3D, which was done by cinematographer Nirav Shah. Legacy Effects made their return to construct prosthetic makeup and animatronics, with visual effects supervised by V. Srinivas Mohan. Editing was handled by Anthony and production design was conducted by T. Muthuraj.

2.0 was released worldwide in both 3D and conventional format on 29 November 2018, along with its dubbed versions in Hindi and Telugu. It received generally positive reviews upon release. Critics particularly praised the film's visual effects, performances of Rajinikanth and Kumar, and social message; the pace and screenplay received criticism. It earned ₹117.34 crore (US$16 million) worldwide on its first day, which was the second highest ever for an Indian film. The film crossed ₹520 crore (US$72 million) in its opening weekend to be the highest-grossing film worldwide for that week. 2.0 is the second highest-grossing film in India and is the sixth highest-grossing Indian film worldwide.