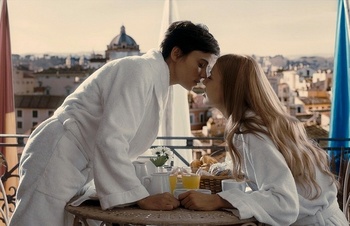 A 2010 Spanish film directed by Julio Medem. Two women go to one's hotel room after meeting in a bar earlier, where they end up having a tryst. One, Natasha (Natasha Yarovenko) is Russian, the other, Alba (Elena Anaya), is Spanish, and they are both soon to be leaving for their respective countries the following morning. The circumstances of their meeting is left vague. While in the room they exchange stories about their lives, many of them false, but maybe with a grain of truth behind them, and grow closer as the night wears on.

The film was shot on a small budget. The entire action takes place in that single room and the entire story is driven by the acting and dialogue of the two leads.

During the course of the action each character takes on many different names. The article will refer to them by the names that they first give to each other: Alba and Natasha.