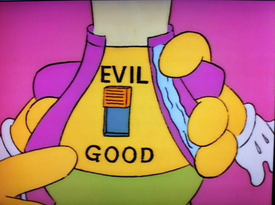 Surprisingly, it's still kid friendly and safety compliant.
"I was set to 'EVIL' once."
— Teresa from Barbie: Life in the Dreamhouse recalls a Noodle Incident
Advertisement:

Whether comedy or parody, many robots have a dial that can switch their morality from Good to Evil, usually entailing a good old Killer Robot when turned to Evil.

Some especially evil robots have Bad / Worse for their dials, or other stranger settings. Usually a built-in form of brainwashing/Face–Heel Turn that means robot A.I. Is a Crapshoot.

Any robot with a Morality Dial will always, always have it flipped to the other setting at some point.