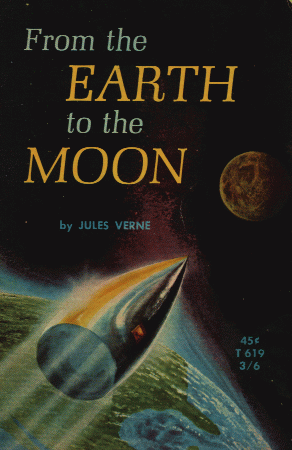 At the beginning of the Science Fiction genre, space travel was a new and novel trope. It wasn't about the destination - the journey alone was interesting enough. There was no Casual Interplanetary Travel (let alone interstellar). We didn't have your fancy Hyper Drive or wormhole networks or your sub-ether anagrammed-tribadist Teslafied radio transmittion contraptions, and we had to walk sixteen miles back and forth through the snow to the launch site. We were lucky if we had a pith helmet! Our science was silly, but it tried to be hard ...for its time (except for Cavorite. That's just magic).

You youngsters with your single-stage rockets and inertialess drives and horseless space shuttles have it easy. Back then, you had to build a balloon filled with evaporating morning dew, or strap on a giant rocket, or get shot out of a bloody cannon at the Man in the Moon and put his eye out. That's how we did it.

Well, that's how the hired help did it.

You could go anywhere your heart desired, as long it was the Moon, Mars, or Venus. Or the Counter-Earth, ruled by the rapacious Hun and the Kounter-Kaiser!

Back then, Men were Men, the Moon Men were Moon Men, or sometimes bats or bugs, Martians were Martians, and the Venusians were jungle-dwelling crab women!

And that's how we liked it, consarnit!

To put it another way, an Interplanetary Voyage is a specific type of science-fiction story that takes the phrase "getting there is half the fun" very literally. In most cases these stories focus just as much, if not more, on the actual process of traveling in space as they do on the destination itself. Nowadays, this is largely a Dead Horse Trope outside of parodies or Genre Throwback works—the fact that space travel actually exists now allows writers to spend less time establishing it and more time building alien worlds. As a result, Interplanetary Voyage stories are strongly associated with science fiction novels of the late 19th and early 20th centuries, and with pulp magazines published during that era.

Nevertheless, some modern writers still play this trope straight as deliberate Zeerust, while others treat it more realistically—works on the harder side of the Mohs Scale of Science Fiction Hardness might depict a crewed mission to a planet like Mars or Jupiter using modern or near-future technology as a long and arduous journey, dealing with challenges such as life support, radiation, or equipment failures.

See also Journey to the Sky, its earthly equivalent. Contrast Casual Interplanetary Travel, where travel between planets is so trivial that it is barely touched upon in the story.