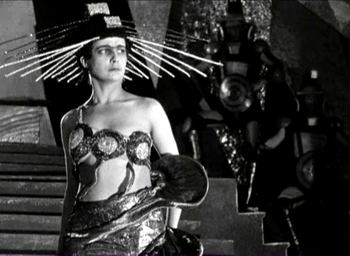 Aelita, aka Aelita, Queen of Mars, is a 1924 film from the Soviet Union, directed by Yakov Protazanov.

It is 1921, as the Russian Civil War is winding down. All the radio stations in the world receive a bizarre message from space, "Anta Odeli Uta." No one knows what to make of it. One of the people who hears the message is Los, a Moscow radio station operator. Los is obsessed with Mars and is building a rocket ship to go there, along with his partner, Spiridnov.

Meanwhile, in more earthly concerns, a minor Soviet bureaucrat named Erlich has weaseled his way into receiving Los's apartment. Erlich starts paying entirely too much attention to Los's pretty wife, Natasha, who starts responding to the attention due to Los being too distracted by his work. When he isn't hitting on married women, Erlich is stealing rationed goods and selling them on the black market.

Los is daydreaming constantly about Mars, imagining a society with a king and queen, Tuksub and Aelita, and a ruling class that lords it over poor workers that are kept in cold storage when they aren't needed. Los, whose marriage is deteriorating, imagines that Aelita looks at Earth from her Martian telescope, sees him, and is attracted to him. He also visualizes Aelita as looking just like his wife. Finally jealousy causes Los to snap, and when he catches his wife in a compromising position with Erlich, he shoots his wife to death. He hops on his rocket ship and flees to Mars, only to find that Aelita is real, and that she wants him.

Notable as probably the first science-fiction feature film ever made. Based on a novel by Alexei Tolstoy, distant relative of that more famous Tolstoy. A big hit in the Soviet Union at the time, but the film's rather too honest portrait of things like rationing, black market smuggling, and overcrowded orphanages later got it banned.

Not to be confused for the character Aelita from Code Lyoko, or Alita from Battle Angel Alita, or with Aelita from Lifeless Planet (all of which are named after the novel this film is based off of).