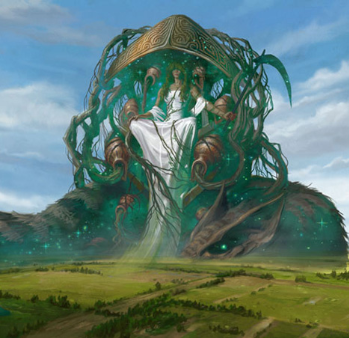 "God comes to the hungry in the form of food."
— Mahatma Gandhi
Advertisement:

This is the god of whatever food is the basis for a culture's survival — usually grain, but for a steppe people it might be grass for animals and for a coastal people it might be fish, or whatever is appropriate to a given environment. Because of their inherently lifegiving portfolio, these tend to be among the nicest or friendliest of gods.

Often a Love God as well to associate different types of fertility. For Older Than Dirt cultures who considered food a type of currency, these deities could also be a type of wealth god.

Compare Anthropomorphic Vice, which are Anthropomorphic Personifications of various vices, including food and drink; and Supreme Chef, who fulfills the other, more figurative sense of "food god". This is often one specific function of a Fertility God.

Not to be confused with Foodgōd, the new moniker of Kim Kardashian's friend Jonathan Cheban.