Western Animation / The SpongeBob Movie: Sponge out of Water 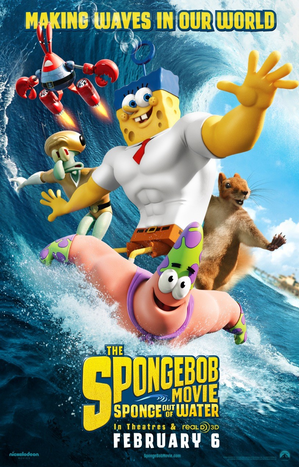 The SpongeBob Movie: Sponge Out of Water is a live-action/animated hybrid movie based on the popular Nickelodeon TV series SpongeBob SquarePants, and a stand-alone sequelnote Or prequel, depending on who you ask, since the first movie is considered to be (and was written as) the canonical Grand Finale. Considering the series' reliance on Negative Continuity, it doesn't really matter. to 2004's The SpongeBob SquarePants Movie, released on February 6th, 2015. It was directed by Paul Tibbitt, with screenplay by Jonathan Aibel and Glenn Berger (of Kung Fu Panda fame) based on a story written by Tibbitt and show creator Stephen Hillenburg. The live-action portion of the film is directed by Mike Mitchell of Sky High (2005) fame, and worked on the show in early season 4.

Like the first movie, the final act mixes animation and live-action, with the characters going to the surface. However, instead of remaining in their 2D forms, the characters become CGI.

It is the first film released under Paramount's current in-house animation division Paramount Animationnote Paramount first bought in 1942 Fleischer Studios and renamed it in 1948 as Famous Productions, then after a series of reorganisations as Paramount Cartoon Studios in 1956, and then after Gulf+Western acquired Paramount, it was shut down in 1967. The success of Rango made Paramount reopen its animation division and terminate its distribution contract with DreamWorks Animation, the first theatrical animated movie tied to a Nicktoon since 2006's Barnyard, which spawned a spin-off series, and the first sequel based on a Nicktoon other than Rugrats.

Sponge Out of Water was followed by another standalone sequel, The SpongeBob Movie: Sponge on the Run, which was released in Canada in 2020 and premiered on Paramount+ in the US on March 4th, 2021.

Imagine what the people who saw this in 3D were feeling.

Imagine what the people who saw this in 3D were feeling.