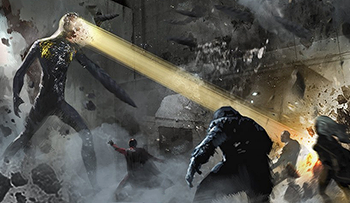 Sentinels are such divas, they really love head shots.
Concept art by Goran Bukvic
In fiction, blast attacks are generated from all manner of places on the human body; the eyes, the mouth, the hands and even the chest. And then we have Head Blast.
Advertisement:

To put it simply, this is the act of firing attacks from the head. Typically this appears as either a beam fired from the forehead, a weapon mounted atop the head/around the face or even turning the head itself into some kind of blaster. Psychic power blasts, such as those fired by comic book telepaths, are usually depicted this way.

A character who fires beams from their literal Third Eye does not qualify as this trope; that's Eye Beams. If it comes out of the mouth, it's a Breath Weapon.

Can sometimes overlap with Weaponized Headgear and Psi Blast.

Not to be confused with Boom, Headshot!, which deals with situations where a head is the target and not the cause of shooting.