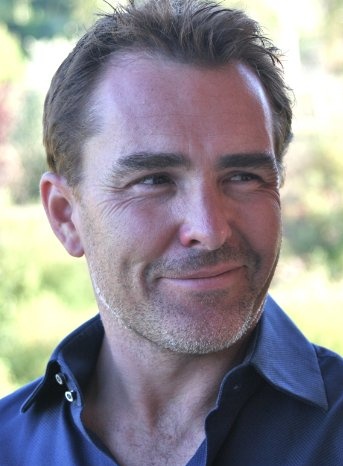 Nolan Ramsey North (born October 31, 1970) is an American actor and voice actor born in New Haven, Connecticut. Although he's been in the business for a while, it wasn't until his post-Uncharted roles that he started to gain prominence due to his rather distinctive voice. Most of the characters he voices are average people who find themselves in really bad situations and cope with them using a good heaping of sarcasm, but he's racked up quite a few Crazy Is Cool flamboyant villains, as well.

He does have range, but he's still usually asked to do the "Drake" voice. In Singularity, this is actually used to throw the player off, whereas his role in Spec Ops: The Line deconstructs it.

He seems to be Marvel's go-to guy for voicing Deadpool. He's one of two alliteration-named actors to play both Green Lantern and Deadpool, the other being Ryan Reynolds.

On Thursdays, North co-hosts Retro Replay, a retro-gaming channel, with fellow voice actor Troy Baker. In April 2019, Rooster Teeth partnered up with the show. Unfortunately in April 2020, after an apparent disagreement with the future direction of the channel, Baker left to form his own channel. Nolan still continues the host the channel, albeit with a rotating series of guests. Furthermore, as a result of Baker's departure, he announced that Retro Replay would be ending its partnership with Rooster Teeth.

"You were recording that, weren't you, Troper? No? Eheheh...WHAT DO YOU MEAN YOU WEREN'T RECORDING THAT?!"