Video Game / The Cat in the Hat 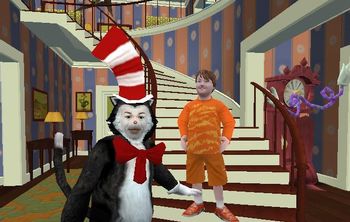 "Well, that could have been a cat-astrophe."
"Okay, here's the story. It was a windy, rainy day. Then, to everyone's surprise, I turn up and cheer up some kids. But then, what do you know. My magical crate is opened, the lock stolen. Magic leaks out and the whole world is in danger! Thus I, the most stylish cat ever to be seen in a hat - you know me - have to recapture all the loose magic which is transforming the house, and recover the lock from Mr. Quinn, their nasty next-door neighbor who is also trying to collect the magic in order to make himself immensely powerful. Hey, what's this 'him being immensely powerful'? That wasn't in my script! Yeah, okay. So the script's changed. And when exactly were you planning on telling me, the star of this whole adventure? Yeah, you know what, okay, whatever! Okay, ladies and gentlemen, the ride is almost over. Thank you for flying Cat In The Hat Airlines and please, get ready to press the start button so we can get this whole mess tidied up!"
—The Cat In The Hat
Advertisement:

The Cat In The Hat videogame, made by Magenta and published by Vivendi Universal Games, is a 2½D Platform Game that was released in November of 2003 for the Xbox, Playstation 2, Gameboy Advance, and PC. It concerns Mr. Quinn, the next-door neighbor of Conrad and Sally, who steals the Cat in the Hat's Crablock. The Crablock is the lock to the Cat's crate full of magic, and without that lock holding it closed, the magic will corrupt the entire house (and, eventually, the world). You, as the titular Cat, must jump, run, and glide through a variety of colorful levels based on common household furniture to collect the magic (along with anything else you can find) and save the world.