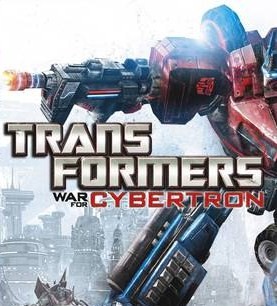 A video game based on the Transformers franchise, released on June 22, 2010. Set before the Transformers come to Earth, the story is set entirely on their home planet of Cybertron. The game is meant to be the basis for an entirely new continuity and to set the stage for storylines of the franchise for years to come. The story is a set-up for the Transformers: Prime TV series.

The player has the opportunity to play as both the Autobots and the Decepticons. Unlike previous Transformers games to do this, however, the plot for both factions will be entirely linear in nature, as opposed to Multiple Ending scenarios, with the Decepticon campaign taking place shortly before the Autobots. The game not only gives an idea of the events that led to both the Autobots' and Decepticons' exodus from Cybertron to Earth, it also shows up close how unflinchingly brutal the fighting was.

So far, the game has been subject to huge amounts of fan joy. Despite being a Continuity Reboot it uses the classic backstory of Generation One as the build-up point, every character possesses their well known personality and each story point reinforces the traditional Transformer saga themes. Everything else comes with modern sensibilities in both story plotting and visual designs. The characters have a look that carries the bulk of G1 (with a bit of the War Within comics thrown in), the shifting pieces and complexity used by the live-action movies, and the sharp angles and proportions of Transformers: Animated.

The excellent voice acting by both old veterans and those new to the franchise and high shout-out quotient certainly adds to it. Older fans love the game for these reasons, and newer fans love the game for its sheer coolness factor. Oh, and the game's actually pretty damn good. The game's success prompted Activision to let High Moon make the Dark of the Moon tie-in game, and a War For Cybertron sequel, Transformers: Fall of Cybertron, was released on August 21, 2012.

Not to be confused with the Netflix Original show.