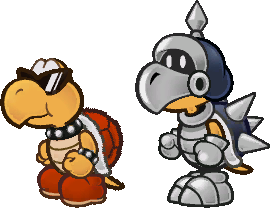 Left; the cooler Koopa Troopa.
Right; the Koopa Troopa that can actually take a hit.
Your basic Mook, but now with armor. If they already had armor it would either be of higher quality or simply cover more of their body. They may also have better weapons. Because of that, they will be much harder to defeat, but slower to move. At least, you hope they're slower...
Advertisement:

Your best bet is to use an Armor-Piercing Attack or an Anti-Armor attack. You can also try attacking the back or weak points, or just plain breaking out your most powerful moves. Sometimes they're outright Immune to Bullets, and there's some special method you have to use to defeat them (making them a sort of Mini-Boss or Puzzle Boss), or you just have to avoid them altogether.

Typically, having such heavy armor will invoke Didn't Need Those Anyway!. Sometimes losing their armor will just give it a speed boost. Injured Vulnerability may also apply.

Often overlaps with Giant Mook. A form of Kung Fu-Proof Mook, where the Kung Fu is normal attacks. If everything seems to be like this, you actually have Incredibly Durable Enemies. For this trope's bigger brother, see Broken Armor Boss Battle.