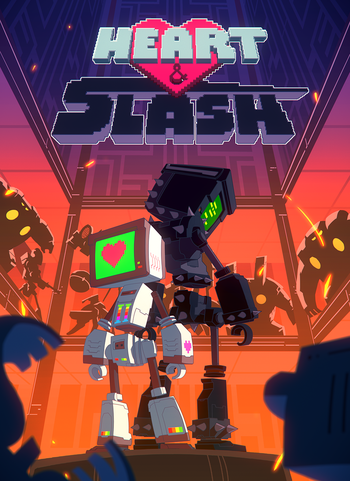 Life, love and death in a world of robots.
Advertisement:

Heart&Slash is a 3D indie Roguelike/brawler videogame created by Aheartfulofgames and published by Badland Games.

During a normal day in the HeartTech facility, the Quality Assurance System (QuAsSy) suddenly rebels against the scientists working there, starting a Robolution which will bring humans to extinction, leaving only robots on the planet. 100 years later, a robot named "HEART" is assembled in the factory and appears to be different than the other robots. Because of this, it is immediately flagged as an anomaly and hunted down by its own kind. HEART wants to keep its uniqueness and it will achieve its goal, even if that would mean slaughtering all other robots one after another.

A Kickstarter was launched in February 14, 2014 and successfully funded on March 19, 2014, then a demo of the game was released