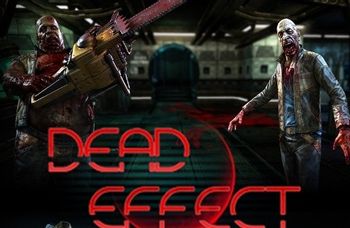 Dead Effect is a 2013 zombie First-Person Shooter with a sci-fi setting, developed for tablets and other mobile devices by inDev Brain. It was then ported to the Unity engine for the PC in 2014, initially through Steam Early Access. Dead Effect 2 followed in 2015 on mobiles, and was then ported to PC in 2016, and to PS4 and Xbox One in 2017.
Advertisement:

While the name is a clear riff on Dead Space and Mass Effect, the actual gameplay is heavily reminiscent of Doom³, with players travelling through the corridors of an abandoned spaceship while battling hordes of zombies comprised of the ship's transformed crew. The sequel had also added Borderlands 2-style Rpg Elements to the series' formula.

Players take the role of either Rated M for Manly Space Marine Gunnar Davis, or cybernetically-enhanced Dark Action Girl assassin Jane Frey, as they wake up from hypersleep on the starship ESS Meridian to find the rest of their Space Marine squad missing and the crew of the ship transformed into flesh-hungry zombies. Guided over the intercom by a surviving scientist named Dr. Wagner, the player must navigate the ship and find a cure before they also succumb to the zombie virus.