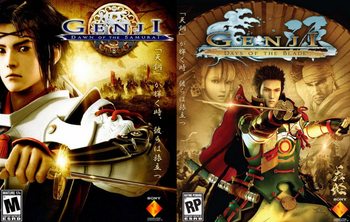 Genji is a Hack and Slash adventure game series developed by Game Republic and published by Sony.
Advertisement:

The series is loosely adapted from the classic Japanese novel The Tale of the Heike, which in turn was a romanticized account of the actual Genji and Heike war. The Taira clan has conquered Japan with the help of some magic stones called "Amahagane" (litt. Heavenly Steel) which grant great powers to their wielders. The young swordsman Yoshitsune finds out that he's the rightful heir of the Minamoto clan and with the help of the Amahagane, the Tamayoribito clan and Benkei he has to stop the villanous plans of the Taira and recover the Amahagane stones.

Had a spiritual successor in the form of Folklore.

Although it's quite a humble-seeming series, you may know the game better as its second installment being the game featured in Sony's infamous E3 2006 conference featuring battles with giant crabs that actually (not really) took place in ancient Japan.

Genji (or more precisely, said E3 2006 conference) is a trope namer for: