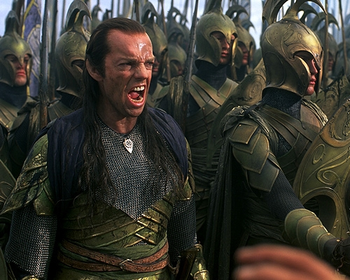 "WHERE'S MY HELMET?!" is not what he's yelling, though it probably should be.
"This helmet, I suppose,
Was meant to ward off blows,
It's very hot,
And weighs a lot,
As many a guardsman knows,
So off that helmet goes!"
— Arac, Princess Ida
Advertisement:

In any work where a hero wears armor, whether powered or otherwise, the helmet is rarely worn, even in combat. In Real Life the helmet is the most important piece of personal armor ever invented besides the shield, since the skull and brain are highly vulnerable to all kinds of weapon blows and projectiles. In an ancient shield formation, your large shield would usually protect your torso but leave your head sticking over the top, thus inviting the slings, arrows, swords, and spears of the enemy. In modern ranged combat you have to expose your head every time you peek out of your trench or foxhole, and all kinds of debris and shrapnel from explosions might fall on your head. Clearly, helmets are a good idea. So why does a character who has access to a helmet rarely use it?

In visual media this is usually the creators bowing to Rule of Perception and Shoot the Money. Even an open-faced helmet will at least obscure a character's hair. Hairstyles can be important for identifying a character in a crowd, especially in animated works with Only Six Faces. A fully enclosed or visored helmet can be an even bigger problem because people are good at recognizing faces, and associate faces with having individuality and personhood. A person without a face is dehumanized and treated as expendable by way of the Faceless Goons trope, which is no good for a character whom you want the audience to care about. In film and television, both the director and the actor will want the audience to see their facial expressions as the heart of their performance. It defeats the purpose of hiring a famous and probably good-looking actor or actress if you're going to make them harder to recognize. Also, according to The Law of Diminishing Defensive Effort, less armour implies a character is skilled enough not to need it.

Alternately, the armor the main character wears might not be distinctive enough to make him stand out from other people wearing armor; we wouldn't want to lose track of our hero among the Faceless Goons, after all. Writers and artists often try to alleviate this by giving main characters almost, but not quite the same uniform as the Faceless Goons — or cheat by giving the hero a helmet, but one that shows their face clearly, while everyone else wears a full face helmet. When this is used to distinguish someone from an identical group of mooks, it's also Uniformity Exception. Real life battlefield recognition solutions adopted by armored warriors such as knights and samurai included elaborate helmet crests; heraldic colors on shields, surcoats, or horse trappings; armors decorated with etching, inlay, appliqué ornaments, heat/chemical bluing, paint, lacquer, or textile covering; and all kinds of Bling of War. Often, fiction will not take full advantage of these options. Also, curiously enough, this trope is especially common for superheroes even though almost all of them do have a completely unique costume that would be instantly recognizable even if the wearer's face weren’t visible.

And in video games where you can customize your character's appearance, wearing a helmet will often obscure it and waste all the effort you put into it.

A variation is that when modern characters are depicted in boxing or martial arts training, they will rarely be shown wearing padded headgear that would generally be mandatory. It's also common for the Badass Biker to forego a helmet.

This may be justified in certain situations. Helmets can be somewhat heavy and restrictive, so a person who relies on keen vision, hearing, or freedom of movement might prioritize those things over the protection a helmet provides. Helmets are also bulky and awkward to carry when not being worn, so a Walking the Earth-type hero is also likely to forego them for the long haul. A character who starts out with a helmet might discard it after it becomes too damaged to use, but this might invite the question of why they don't look for a replacement. In any case, there's still little excuse not to use one in open battle, especially when characters go through the trouble of armoring every part of their body except for the head.

On a related note, in virtually every superhero movie in which the main character wears a mask, it will be pulled off during the climax of the movie. Usually it's torn off or so badly damaged that there's no point in keeping it on; sometimes the hero just decides to take it off.

Contrast Cool Helmet (where the helmet enhances the hero's image) and Fantasy Helmet Enforcement (where the hero is setting a safety-conscious good example). Also contrast Never Bareheaded (in which the heroic character is never shown without a helmet on his head) and Signature Headgear (when the hero's distinctive helmet makes them stand out).

from Embers in the Dusk, where Rotbart promises that anyone caught without a helmet on duty will be assigned to venom milking.
Tabletop Games
Toys
Visual Novels
Web Animation
Webcomics
Web Videos
Western Animation
Real Life