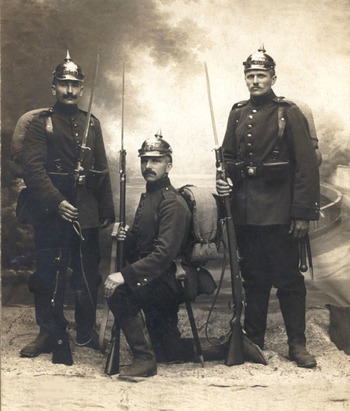 Although it was unified for less than half a century, Imperial Germany already had a strong military tradition inherited from its founding state of Prussia.

In theory there was no German army, but a Bundesheer (federal army) consisting of the Royal Prussian Army and the armies of the other sovereign states (three kingdoms, six grand duchies, five duchies, ten principalities and three free cities) that made up the Empire. Consequently there was no German secretary of war, only a Prussian and a Bavarian minister of war. The armies of all the medium-sized and smaller states were integrated into the Prussian army just before or just after the foundation of Imperial Germany, and the Prussian army also included the soldiers recruited from Alsace and Lorraine (annexed from France in 1871 and administrated by the central German government). Bavaria, being the second-largest state and monarchy had a larger autonomy in military matters than the other non-Prussian states and to mark this its military units were numbered separately, even though as far as arms, uniforms and equipment went the differences were not bigger than between e. g. Prussian and Saxon units. German officers and soldiers would always wear two cockades on their head-dress, a black-white-and-red one for the empire and one of different colours for the nation they belonged: black and white for Prussia, white and blue for Bavaria, red and black for Württemberg, white and green for Saxony and so on.

Seen today mostly on the heads of motorcyclists, the Pickelhaube

◊ ("pointed bonnet") is perhaps the most iconic symbol of Prussia and the German Empire. It was eventually phased out about midway through World War I, as it was realized that the spike made it an attractive target for sharpshooters and that, being made of leather, it did not provide enough protection. It was soon replaced by a simple steel helmet of a swooped-back design, that became known to British troops as the "coal scuttle", but was officially called the Stahlschutzhelm, Modell 1916 ("steel protective helmet, model 1916"), or Stahlhelm for short. (In German the word "Stahlhelm" is generic and also applies to steel helmets of all kinds of models, including non-German ones). A modernized version of this is used by the Bundeswehr since the early 90s (initially, the Bundeswehr abandoned the Stahlhelm in favor of American-style M1 "GI pot" helmets for obvious reasons, but the design's image had been rehabilitated somewhat since the U.S. Armed Forces and most other NATO armies adopted very similar designs starting in the 80s because it offers better ballistic protection than the classic GI helmet and the Germans eventually followed suit).

In contrast to the ground forces, naval matters were considered national, not federal, and so in 1872 an Imperial Admiralty replaced the Prussian Navy Ministry. This was split into three bodies in 1889, including the Reichsmarineamt (Imperial Navy Office), which was headed by a Secretary of State (Imperial Germany's equivalent of a minister). With few overseas colonies, Germany did not have a need for a large navy, focusing its attention on the army to protect against the Great Powers that surrounded it. That changed at the dawn of the 20th Century, when Kaiser Wilhelm II wanted to have a navy that could rival his British cousins.

When the war started, the German admirals knew full well they could barely compete with the Royal Navy's numerical advantage and worldwide network of bases, not to mention their centuries-long naval tradition. German naval forces overseas, most notably the East Asian squadron (based in Tsingtau (Qingdao)) were for soon sent to the bottom of the sea despite fighting creditably, only the battle-cruiser S.M.S. Goeben and the light cruiser S.M.S. Breslau managing to escape from the Mediterranian to Constantinople. After some minor skirmishes, the two navies finally clashed in full at Jutland, which is considered one of the largest naval battles in history. Although the High Seas Fleet claimed a tactical victory by tonnage sunk, they realized they were now ineffectual to break the British blockade and searched for other means to do so.

The answer was a submersible vessel that the Germans referred to as an "Unterseeboot" ("under-sea boat", or in Latinate English, "submarine boat"), which had quickly entered the English language as "U-boat."note Do note that in German, "U-boat" is the generic term for any submarine, German or otherwise. While the last nation to adopt the submarine as a naval vessel, Germany was the first to demonstrate its capabilities. In the first weeks of World War I, U-9 sank three British cruisers in less than an hour; a primitive submarine with a crew of 24 that could take down 1500 enemy sailors proved irresistible. The Imperial Navy was quick to capitalize on this new weapon, using U-boats to heavily target the shipping that Britain depended on. Over the course of the war, an astounding 30% of all the world's merchant shipping had been sunk, most of it by U-boats. Eventually, the British managed to win the Battle of the Atlantic by adopting the convoy system: placing ships in large groups protected by escort vessels. This immediately emptied the ocean of ships and concentrated efforts of escorts allowed the usage of the depth charge, a new bomb that exploded at a specified depth, to sink U-boats. Once the war ended, Germany surrendered all of her U-boats to the British. One of the surviving captains, a young officer named Karl Dönitz, immediately began thinking of ways to respond to the convoy and prepare for the next submarine war.

The story of branch of Manfred von Richthofen, better known as the Red Baron, the "Imperial Air Service", is again complicated. Technically both the army and the navy had their own air services, which not only included airplanes, but also airships (most of the Zeppelins that bombed Britain belonged to the Navy, for instance). The federal nature of the army also caused some problems, as Bavaria during part of the war was intent on keeping its units separate and equipping them with planes produced by the Bavarian manufacturer Pfalz. Still, the German air service(s) made a significant mark on the history of aerial warfare.

All of the belligerent powers used aircraft for military purposes, primarily scouting enemy positions, from the start of the First World War, and the first pilot to be called an "ace" for bringing down multiple enemy planes, Adolphe Pegoud, was in fact a Frenchman. However, it was the German air service who fielded the first truly effective air superiority fighter with the introduction of the Fokker E-Series Eindecker (Monoplane) fighters in the spring of 1915. The following period of approximately one year before the Allies were able to counter with equally effective fighters such as the Nieuport 11 and De Havilland DH.2 became known as the "Fokker Scourge" and established the reputations of many German aces such as Max Immelmann and Oswald Boelcke.

Though Germany was among the last in the Race for Africa and her colonial period lasted only three decades, her small colonial army, the Schutztruppe, was well-trained. Most of Germany's colonies (in modern Namibia, Papua New Guinea, Cameroon and Togo) were lost at the start of WWI, but East Africa was an exception. Under Lt. Colonel Paul von Lettow-Vorbeck, the Schutztruppe waged a brilliant guerrilla war. Mostly African natives with a smattering of German officers, settlers and Naval auxiliaries, they tied down over twenty times their number of troops. They were never decisively defeated and only surrendered two weeks after the Armistice - in British Rhodesia.

Pretty much any work dealing with World War I will feature the Imperial German armed forces in some context, for this see Works Set in World War I. In contrast to the Wehrmacht, Imperial German forces are usually considered less of an Acceptable Target in English-language media and are more likely to receive a sympathetic, or at least balanced, portrayal.