Film / Those Magnificent Men in Their Flying Machines 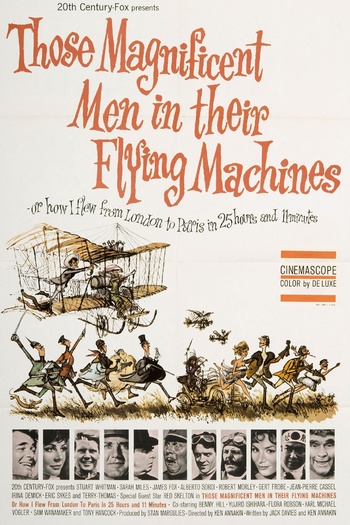 Those magnificent men in their flying machines,
They go up diddley up-up, they go down diddley down-down!
Advertisement:

Those Magnificent Men in Their Flying Machines, or How I Flew from London to Paris in 25 Hours 11 Minutes, to give its full title, is a 1965 British-American period comedy film (released through Twentieth Century Fox) about an international air race held during the early, pre-World War I days of aviation. A wacky cast of characters assembles with their wacky aircraft, a love triangle develops, Worthy Opponents square off, and great fun is had by all... except for those who can't stay in the air.