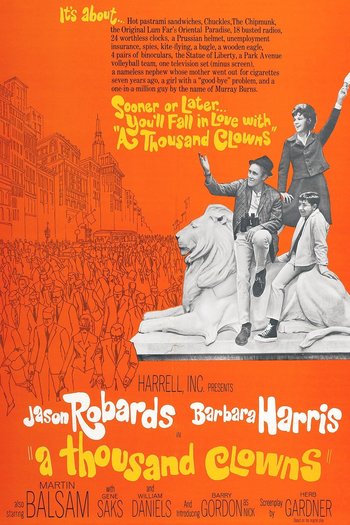 Murray Burns (Robards) is an unemployed television writer, who has been jobless for five months, since he left his previous gig writing for children's show Chuckles the Chipmunk. Murray is guardian to his 12-year-old nephew Nick (Gordon), who has been with Murray since Nick's irresponsible mother dropped Nick off seven years ago and disappeared.

When Nick writes an essay for his school about the wonders of unemployment insurance, the school contacts the Child Welfare Board. Two social workers are sent to the studio apartment shared by Murray and Nick. The female social worker, Sandra Markowitz (Harris), is utterly charmed by Murray and soon falls in love with him. However the male social worker, Albert (Daniels), is outraged by Murray's joblessness and free-spirited attitude, and recommends that Nick be removed from Murray's custody. In order to maintain custody over the boy, Murray must do what he dreads most—get a job.

The film was adapted from Herb Gardner's 1962 Broadway play of the same name, with pretty much everyone in the cast except for Barbara Harris reprising their stage roles.

Was nominated for four Academy Awards, including Best Picture, and won one for Best Supporting Actor (Balsam).