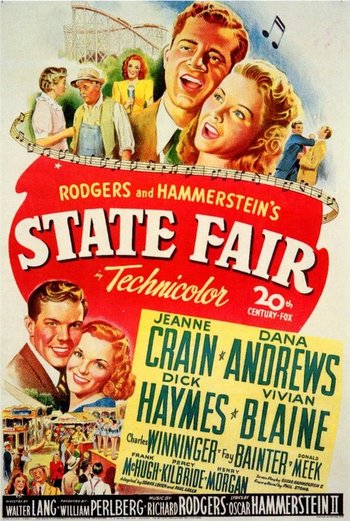 There have been three films released with the title State Fair, all based on a novel by Philip Strong.

The first was a 1933 version, directed by Henry King, starring Janet Gaynor, Will Rogers, and Lew Ayres. In 1945 there was a musical version directed by Walter Lang, starring Jeanne Crain and Dana Andrews. This version has music by Rodgers and Hammerstein, and it was their only movie not based a Broadway musical, although it spawned a Screen-to-Stage Adaptation in the mid-1990s. A remake of the musical version, starring Pat Boone and Ann-Margret, was released in 1962.

As the Frake family prepares for a trip to Iowa's annual state fair, Abel Frake bets a friend that he and his family will achieve all the goals they set for the occasion. Abel has raised his pig, Blueboy, to become a contender for a blue ribbon. His wife, Melissa, has made mincemeat and pickles for cooking contests. Their son, Wayne, has brushed up his ring-tossing skills. Finally, Abel's and Melissa's daughter, Margy, hopes to find love during her temporary escape from mundane life on the farm. At the fair, Margy's dreams seem to start coming true when she meets a worldly reporter named Pat Gilbert. Wayne, meanwhile, has become attracted to a singer named Emily (her last name varies between versions). As Abel, Melissa, and Wayne rack up prizes, an issue rises: can these new couples maintain their relationships after Iowa's state fair ends for another year?

In the 1962 film, the Frakes attend Texas' state fair, where Wayne plans to win a car race, and Emily works as a showgirl. This version also boasts six additional songs, written by Richard Rodgers. note Oscar Hammerstein having died in 1960

There was also a failed tv pilot in 1976, which changed the family's last name, added a third son, and had the daughter recently returned to the farm with her young son while separated from her husband. Only available as an extra on the 2-disc Special Edition DVD of the 1945/1962 film.