Theatre / State of the Union 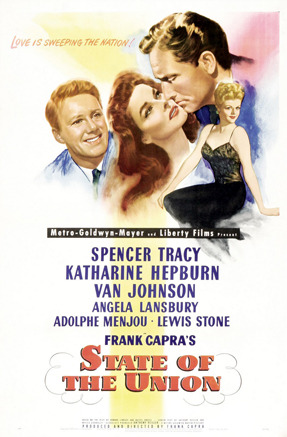 "You politicians have stayed professionals only because the voters have remained amateurs."
Advertisement:

Originally a 1945 stage play written by Russel Crouse and Howard Lindsay, State of the Union was adapted into a 1948 feature film by Frank Capra (the second and last film he directed for Liberty Films), starring Spencer Tracy, Katharine Hepburn, and Van Johnson.

Grant Matthews (Tracy) is an industrialist with an aircraft manufacturing business. His lover, newspaper magnate Kay Thorndyke (Angela Lansbury), convinces him to run for the Republican nomination for President. While Thorndyke, political guru Jim Conover (Adolphe Menjou), and campaign manager Spike McManus (Johnson) are initially nervous about just how Matthews' semi-estranged wife Mary (Hepburn) is going to react, she proves surprisingly enthusiastic about Grant's campaign, and grows even more so when Grant comes out shooting from the hip on the campaign trail, telling hard truths to labor interests and capital interests and whoever else will listen. This proves wildly popular with the common folk, but Conover and Thorndyke, who are worried about getting the nomination for Grant at the Republican convention, wind up convincing him to cast his principles aside and make a series of sleazy backdoor promises in order to win the nomination and the White House.

The original story was inspired by businessman and attorney Wendell Willkie's surprise candidacy that won the Republican nomination in 1940.