Film / The Power and the Glory 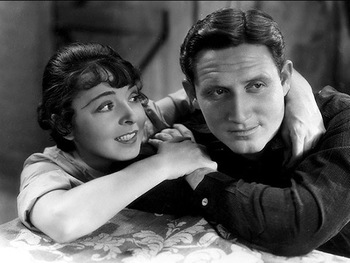 The Power and the Glory is a 1933 drama film directed by William K. Howard, starring Spencer Tracy and Colleen Moore.

Tom Garner (Tracy) is a railroad magnate — or rather, was a railroad magnate, since the film starts with his funeral. His lifelong friend and right-hand-man Henry (Ralph Morgan) shuffles home sorrowfully from the funeral, only for Henry's widow to snap that she's glad Tom's dead, that he was a bad man who threw his first wife Sally (Moore) aside, that he's responsible for the deaths of 400 workers in a strike. Henry disagrees, and in a series of flashbacks relates the story of Tom's life and how it went from triumph to tragedy.

The Power and the Glory was a milestone in the careers of more than one person involved. Spencer Tracy's performance was hailed by critics, and this film helped propel Tracy, an up-and-coming leading man, to greater successes. Colleen Moore had been a huge star in the silent film era, who was attempting a comeback in talking films after a four-year hiatus. The poor box office of this film did not help her, and after making only two more movies she retired for good. The screenplay was written by none other than Preston Sturges, his first; he also got a then-unusual profit-sharing deal.

This film, with its Anachronic Order flashback structure, the use of a close confidante of the hero to tell the story, Tom's two wives (with the first wife dying and the second marriage going bad), and the whole idea of a Lonely at the Top businessman meeting a sad end, has often been cited as a strong influence on Citizen Kane. Orson Welles said he never saw this film but Herman J. Mankiewicz, the co-writer of the Kane screenplay and creator of the original story, did.

Compare The Sin of Nora Moran, a lower-budget movie released the same year, with a similar Anachronic Order fractured narrative.

This film has no connection to the 1940 novel The Power and the Glory, written by Graham Greene.